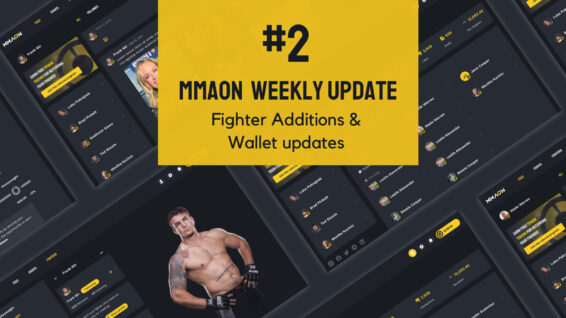 Welcome back to the second edition of the MMAON Weekly Update!

As we head into the closing weeks of 2021, the team remains busy and committed to adding to the MMAON platform, with an exciting announcement due to arrive any day now about our wallet!

We’re delighted to welcome a number of new fighters to the platform, from newly-crowned UFC light heavyweight champion Glover Teixiera to the ‘Pitbull Brothers’, Patricky and Patricio Freire.

Our partners, BRAVE Combat Federation hosted their 55th show, this time in Rostov, Russia headlined by Ali Bagautinov knocking out Sean Santella in sixty-one seconds to continue his claim as one of the world’s best flyweights.

MMAON continues to build the future for all stakeholders in combat sports, from the fighters to the fans. We’re hoping you’re enjoying being a part of the early days of MMAON!

The word is spreading amongst the combat sports community, especially with Brazilians as we welcome Glover Teixeira, Alex Pereira, Miguel Baeza, Patricky Freire and Patricio Freire to MMAON.

They join over 650 fighters on the platform so far, with the feed beginning to fill up with all things fighting!

Who do you want to see join the platform next?

We’re almost ready to announce a huge partnership on our wallet feature, which is set to be rolled out before the end of the year. The final few details (dotting the i’s and crossing the t’s) are being completed and we cannot wait to share this with you!

The addition of a revolutionary wallet was always a key function of MMAON, bridging the gap for fighters and fans to make transactions smooth and seamless across multiple currencies and cryptocurrencies.

KYC will also be a part of this update on the platform, for those asking! Don’t worry, your referral MMAON is safe until KYC is released!

Another week flies by and with the content and user base ever-growing, MMAON continues to make strides in the combat sports space!

That’s it for this week! And remember… MMA is ON!